President Donald Trump is leaving his mark on the Republican Party, with political candidates across the country shaping themselves in his populist, antiestablishment mold.

In races for Congress, governor and other offices, dozens of insurgent Republican candidates are touting their ties to Mr. Trump, echoing his slogans and seeking his endorsement against GOP rivals who are more conventional.

Some of these Trump-inspired candidates are political neophytes. Others are conventional GOP politicians who have repositioned themselves as outsiders as they gear up for Republican primaries in 2018.

Their fate will help determine whether Mr. Trump turns out to be a one-of-a-kind political phenomenon or whether he will have a lasting impact on the next generation of Republicans.

Mr. Trump has pushed the GOP in new policy directions, such as being more cautious about free trade and less concerned about reducing the federal deficit. The arrival of a wave of like-minded House and Senate members could make it far easier for the president to turn those ideas into law. 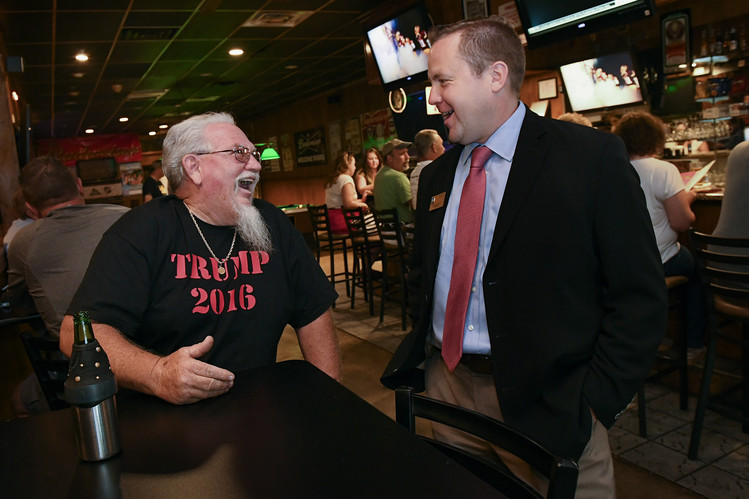 These campaigns are fomenting more antiestablishment rhetoric within the Republican Party, where divisions are growing between Mr. Trump and some top lawmakers, including Senate Majority Leader Mitch McConnell (R., Ky.).

“People have just had it,” says Mark Munroe, chairman of the Republican Party in Mahoning County, Ohio. “The party is going through a transition, a metamorphosis. It’s a struggle between the old, traditional Republican Party and what you might call the new Republican Party, which is more Trump-like.”

Democrats hope that any candidates who sound like Mr. Trump will be easier to portray as extremists and that competition for Trump supporters by Republican candidates will alienate swing voters.

While that might be a successful strategy in primary races, Mr. Leopold says “it will be a problem in the general election.”

In the swing state of Virginia, former Trump campaign aide Corey Stewart, now running for the Senate, defends the Confederate flag and vows to crack down on illegal immigration.

“I was Trump before Trump was Trump,” Mr. Stewart said at his campaign announcement. “There’s an appetite for a Republican fighter, and that’s what I’m going to give people…I felt liberated by President Trump’s race.”

GOP candidates in Mr. Trump’s mold are most common in states he won in November, such as Alabama, Georgia and Ohio. But even in the swing state of Nevada, where Democrat Hillary Clinton won in November but Mr. Trump won the GOP primary, Republican Sen. Dean Heller is facing a primary challenge from Danny Tarkanian, a pro-Trump businessman.

Both political parties have undergone occasional makeovers. In the 1990s, President Bill Clinton transformed the Democratic Party into a more centrist, business-friendly political force. Republican Ronald Reagan’s election in 1980 was a triumph for the conservative movement and marked the beginning of the end of the GOP’s dominance by moderates.

Mr. Trump has signaled some interest in shaping the party more directly through endorsing or encouraging primary challengers to Republicans who have crossed him. That is unusual because presidents usually try to avoid weighing in on intraparty fights. 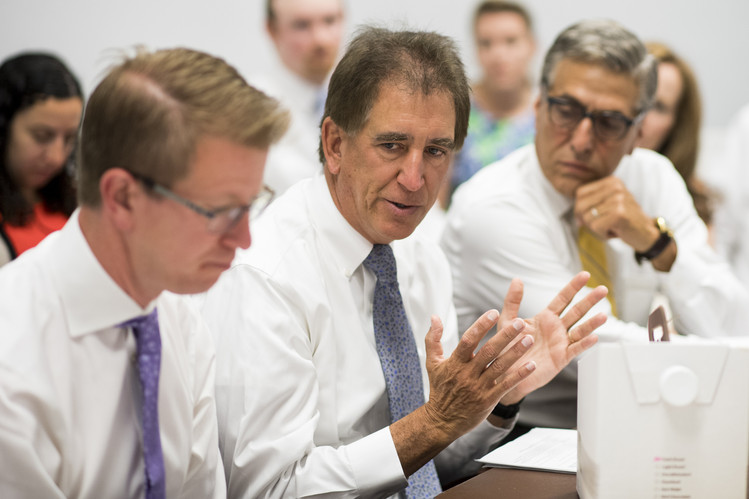 ‘If you’re happy with where the state is today, you probably don’t want to elect me.’

—Jim Renacci, a Republican running for governor in Ohio

In a tweet in mid-August, Mr. Trump praised the Republican primary challenger to Sen. Jeff Flake (R., Ariz.), who wrote a book that includes criticism of the president. Mr. Flake replied that he would take his cues from Arizona voters, not the White House.

In Alabama, Mr. Trump backed Sen. Luther Strange in a special election for the Senate seat vacated by Attorney General Jeff Sessions. The endorsement was seen by people close to the race as inspired as much by opposition to one of Mr. Strange’s opponents, Rep. Mo Brooks, as enthusiasm for Mr. Strange, a mainstream politician. Mr. Brooks had criticized Mr. Trump during the 2016 campaign and more recently for feuding with Mr. Sessions.

Mr. Strange placed second in the primary to evangelical conservative Roy Moore, and the two men will be in a Sept. 26 runoff.

Some GOP strategists warn that Mr. Trump’s political appeal might not be transferable to other politicians, no matter how hard they try.

“There are candidates who are Trumpy, but there is only one President Trump,” says Rob Jesmer, former executive director of the National Republican Senatorial Committee, which works to elect Senate Republicans. “He has a unique ability to connect with voters. I think it’s very hard to replicate that.”

Still, Mr. Trump has clearly made it more acceptable for GOP candidates to openly respond to voter frustrations about Washington with a provocative, populist message, as Mr. Trump did on the campaign trail.

Some Republicans see the emergence of Trump-like candidates as an important step in making the GOP more responsive, especially on pocketbook issues. But those candidates can also be more divisive than traditional Republicans, worrying some party officials about their general-election prospects.

The first such candidate to make a big splash was Mr. Stewart in Virginia. He was Mr. Trump’s campaign chairman in Virginia for part of the 2016 campaign and lost the Republican primary for governor by just a percentage point in June to establishment favorite Ed Gillespie, former chairman of the Republican National Committee. 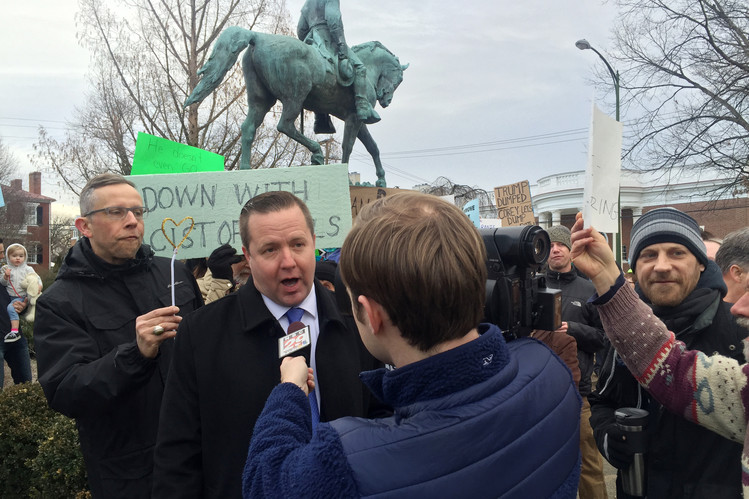 In July, Mr. Stewart said he would try to defeat Democratic Sen. Tim Kaine next year.

In Georgia, state Sen. Michael Williams is running in the GOP primary for governor in 2018 as a Trump loyalist. Mr. Williams’s profile on Twitter boasts that he was: “1st GA elected official to endorse Donald Trump.”

Mr. Williams compares his underdog status to Mr. Trump’s at the start of the GOP presidential primaries last year.

“They said that about Donald Trump, too” Mr. Williams said in an interview with right-wing news site Infowars.

With or without Mr. Trump’s support, some Republican candidates are invoking him as a signal to Trump voters.

In Indiana, Rep. Todd Rokita announced his Senate bid in August and released a campaign video that features footage of a Trump campaign rally. “Take the next step,” the video says.

Before the announcement, Mr. Rokita circulated a letter from Mr. Trump’s top campaign leaders in Indiana that vouched for the congressman’s loyalty to the president.

In Ohio, Mr. Trump has helped reshape the GOP from the top down. After winning Ohio by 8 percentage points, Mr. Trump successfully lobbied for replacing the Republican Party’s state chairman, Matt Borges. Mr. Borges was an ally of Ohio Gov. John Kasich, a presidential primary rival of Mr. Trump.

Even established Ohio politicians like State Treasurer Josh Mandel are starting to sound more like outsiders. Mr. Mandel is trying for the second time to unseat Democratic Sen. Sherrod Brown and has put new emphasis on sanctuary cities, Islamic radicalism and other issues promoted by Mr. Trump.

“Most people think Washington is broken, but really it’s just a rigged system,” Mr. Mandel said in a video when he launched his campaign. “We’ll go to Washington and drain the swamp.”

Mr. Mandel’s primary rivals include Mike Gibbons, a Cleveland businessman who is a political novice in the Trumpian mold. Mr. Gibbons, a top Ohio fundraiser for the Republican Party and the Trump campaign in 2016, says he doesn’t always agree with the president’s bombastic style but was inspired to run for the Senate by a similar frustration with the Washington establishment. 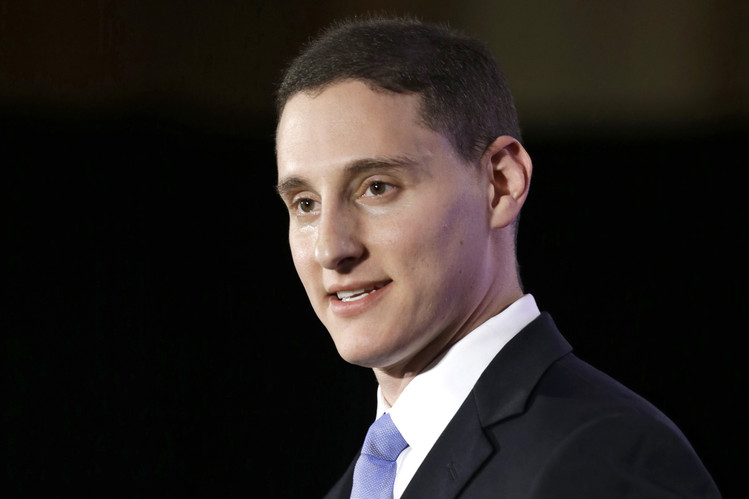 Ohio State Treasurer Josh Mandel is among the establishment Republicans who are starting to sound more like outsiders. PHOTO: TONY DEJAK/ASSOCIATED PRESS

‘We’ll go to Washington and drain the swamp.’

—Josh Mandel, a Republican candidate for Senate in Ohio

Mr. Gibbons cheered when Mr. Trump attacked Mr. McConnell for failing to deliver legislation to repeal and replace the Affordable Care Act. “The president is right,” said Mr. Gibbons. “Our party let him down. They have abandoned him, and I’m disgusted.”

Novice GOP candidates often face one of the same daunting challenges that Mr. Trump did. Establishment-backed candidates usually have a big fundraising advantage.

Mr. Gibbons’s campaign had $602,000 in cash at the end of June, the latest period for which figures are available. Mr. Mandel, endorsed by Ohio’s other senator, Rob Portman, had $3.4 million.

“The three opponents I have are all career politicians,” said Mr. Renacci, a House member since 2011, at the political event earlier this month in Ravenna, a small city near Akron. “If you’re happy with where the state is today, you probably don’t want to elect me.”

Mr. Renacci’s campaign slogan is “Ohio First,” an echo of Mr. Trump’s promise during his own campaign to put “America First.” Like Mr. Trump, Mr. Renacci is funding his campaign in part with wealth attained as a businessman. The total is $4 million so far.

Former Trump campaign manager Corey Lewandowski headlined a Cleveland fundraiser for Mr. Renacci, who has been endorsed by the groups Bikers for Trump and Citizens for Trump.

The president hasn’t endorsed Mr. Renacci, but his website includes video from a June event where Vice President Mike Pence praised Mr. Renacci. “I was for Jim Renacci before it was cool,” Mr. Pence said.

Mr. Renacci is trying to appeal to voters like Harvey McClary, a retired auto worker from Diamond, Ohio, who came to Ravenna to see where Mr. Renacci stood on the president’s response to the violent white supremacist protest in Charlottesville, Va.

“I have one question I want to ask him: Do you support President Trump?” said Mr. McClary. “If he’s not going to support the president, I don’t want him.”

Write to Janet Hook at This email address is being protected from spambots. You need JavaScript enabled to view it.

Appeared in the September 1, 2017, print edition as 'hopefuls vie to be trumpiest.'